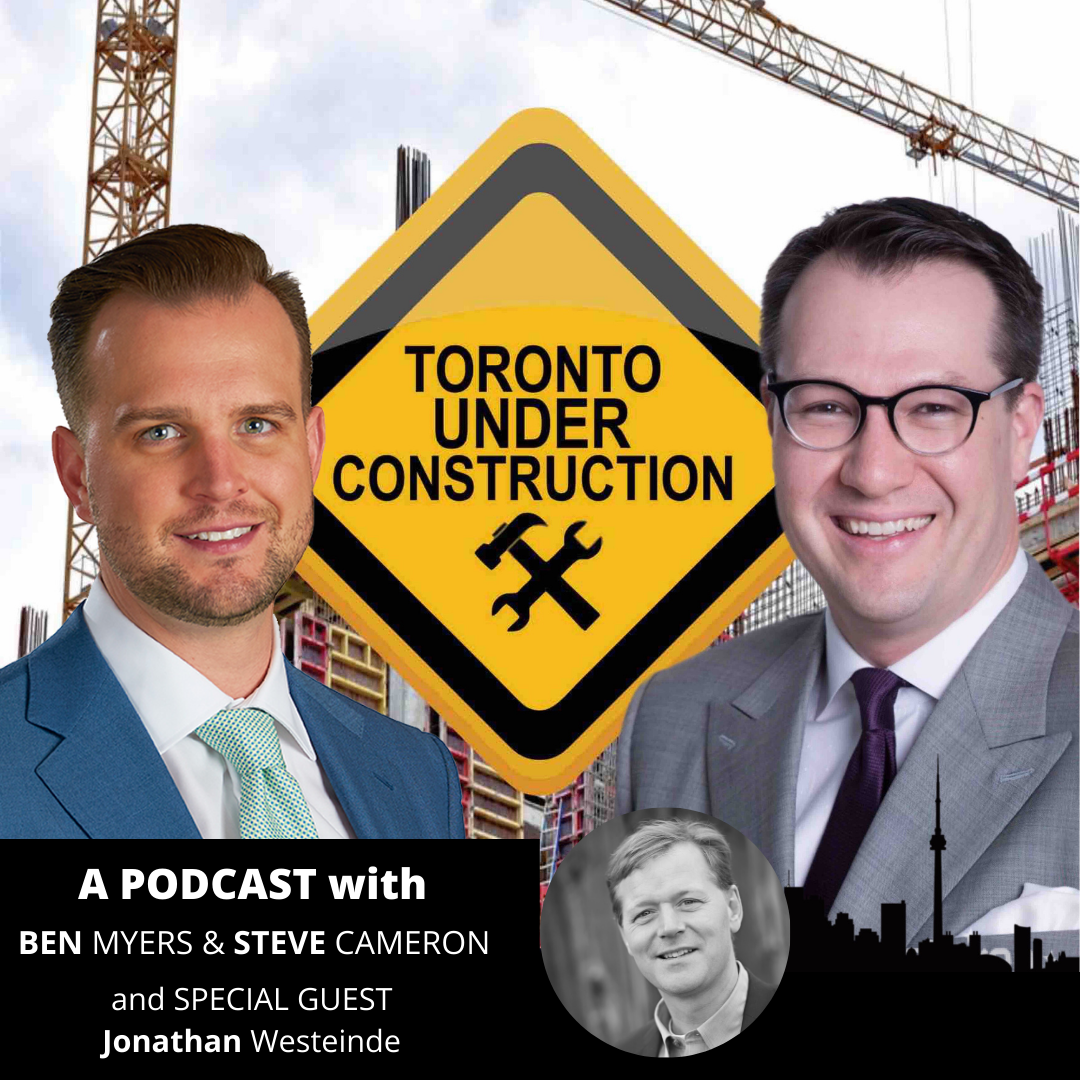 In episode 30 of the Toronto Under Construction Podcast, we venture down the 401, and mix in a little bit of Ottawa Real Estate, with Windmill Developments CEO Jonathan Westeinde. Jonathan is experienced in corporate strategy, finance and business development as it relates to green development practices and joins us to discuss LEED and One Planet Living frameworks, sustainability and creating thriving communities.

The guys jump into the episode asking Jonathan about how he got his start in the industry. Like many developers, Jonathan grew up in a construction family, and had been working on a construction site since age 11. By the age of 18, he was ready to move on. Jonathan got his degree in economics and got involved with management consulting, starts-ups and venture capital projects. Jonathan then got his MBA and moved further into tech and sustainability. Around that time (2003) venture capitalist companies were getting more focused on sustainability, and the building industry was highlighted as a key industry of opportunity to drive a positive climate impact and do it profitability. All these things converged and Jonathan started Windmill Developments, a development company who is a leader in sustainability and green development practices.

LEED Standard: Leadership and Energy in Environmental Design. It is the leading single building rating system to determine how that building is performing from an environmental standpoint; by looking at energy, water, indoor air quality, resilience and material selections. The LEED system is based on a certification spectrum rating from LEED Silver, Gold and Platinum, with Platinum (the buildings Windmill has been delivering) being the best performing buildings in the marketing place today with current known technologies and approaches.

The guys discuss why sustainability hasn’t been adopted as quickly and Jonathan is quick to note that the conversation is certainly changing from “why would we need that? It just costs money” to now understanding that it IS needed. Jonathan shares how development is a hard industry stating that “It’s hard enough just to get a shovel in the ground when you’re doing the bare minimum, so you can imagine what a difficult process it is to try and add layers, like quality and costs on to that.” The complexity is not any less, but the conversations are changing and moving towards more sustainable building. While this is more common in the commercial space, it is starting to be seen within residential real estate as well. The guys discuss how green building can actually pay for itself over the lifecycle of a project, and how it can be structured so that everyone wins at the end of the day.

As the guys continue to discuss sustainability, Jonathan shares some details about some of the green building programs his company has adopted such as the One Planet Living framework which is driving towards zero carbon, incorporates all the different things LEED has, focuses on health and wellness of the building’s occupants, as well as has several components that deal with social impact. “In our evolution of leading, we’ve changed our mantra to no longer saying we want to be the greenest developer, but we want to regenerate community, in the sense of creating thriving places where people, live, work and plan and have a lot of social impact in the things we do as well.”

Zibi – The First One Planet Living Community In Canada

Jonathan shares some details about the first One Planet Living community in Canada called Zibi; a 4 million square foot development downtown Ottawa, that was built on a piece of land that was considered sacred by the local Indigenous Algonquin Nations, and had a lot of government interest as well, so the social impact was critical.

Steve asks Jonathan to share more about how he stick handled this project, and Jonathan explains how he was able to work collaboratively with the Indigenous and local communities, as well as 3 different governments; the project sits 2/3 on the Quebec side, 1/3 on the Ontario side, and in the middle of the Ottawa River, so it is overseen by the National Capital Commission, as well as 2 municipalities.

“The first thing we did was create the framework for the One Planet Living action plan; which enabled us to curate custom impact elements that relate to that community that you’re in, that can really drive change. This allowed us to get the Gatineau, Ottawa, NCC, Indigenous, local community sitting around the table to agree on the principals of what we were seeking to create as a community. Right away walls came down and it was a proactive, not reactive discussion.”

The guys switch gears to Toronto and Ben asks Jonathan to share more about some of his Toronto projects including Plant, downtown Toronto, and The Baker District, a 2-tower revitalization project located in Downtown Guelph.

Steve asks Jonathan to share more about his philosophy on geographical locations saying he seems more opportunistic, which we don’t see a lot in the industry. “We knew we didn’t have the biggest balance sheet, so we have to get ourselves into opportunities like Dockside Green, where we can be in a driving position, but also, really be in positions where everything is aligned politically, all the way to community, with the intent to achieve an industry leading outcome.”

Moving on, the guys ask Jonathan about his involvement with an approximate hundred million dollar capital raised, One Planet Living Real Estate Fund with Epic Investments, which is a mixed used opportunistic real estate development impact fund that aims to deliver returns on investment around 18%.

Ben’s next question is about Jonathan doing some retrofitting of Class B and Class C buildings in Ottawa and Toronto in order to bring them to a modern, environmentally sustainable standard. Jonathan shares that if we want to talk about sustainability new buildings don’t really matter; 99% of the problem is existing buildings and getting them moved along. Jonathan details his partnership with Ledcor Construction with the idea of a developer design, build, finance (if needed) approach to retrofit. He shares details on some of their projects and how they have been able to optimize the buildings’ performance.

Steve comments on how robust the sustainability consultant part of Jonathan’s firm is and Jonathan says “we look at it as a way to increase our knowledge.”

Going back to Toronto, Ben asks Jonathan to share details on his east-end site, which is currently a gas station, and how he got comfortable with the environmentals on the site. “We generally don’t get involved with nice clean projects,” says Jonathan. “About 80% of our deals have been brownfields, and that’s intentional.” Jonathan explains how he gets involved with these projects and shares that this one in particular will be developed into a LEED Platinum mixed use condo.

The guys have a quick discussion on all glass towers and wrap up the episode with their famous rapid fire. Jonathan answers questions like “what’s a better play moving forward: student housing or senior housing?”, “how many rate hikes will we see next year?”, “what’s the next big smart building technology?”, “is air bnb good or bad for the new development industry?”, “which planning department is easier to deal with, Toronto or Ottawa?” and “do we need a mortgage stress test?”. All this and more on episode 30 of the Toronto Under Construction podcast.

If you’re looking to get in touch with Jonathan visit www.windmilldevelopments.com and if you’re interested in the One Planet Living Fund please visit https://epicinvestmentservices.com/portfolio-feature/one-planet-living-real-estate-fund/

Listen to the episode now!

Follow Us On Twitter @BenMyers29 and @TheOneStevieCInterested in being a guest on our podcast? Send us an email