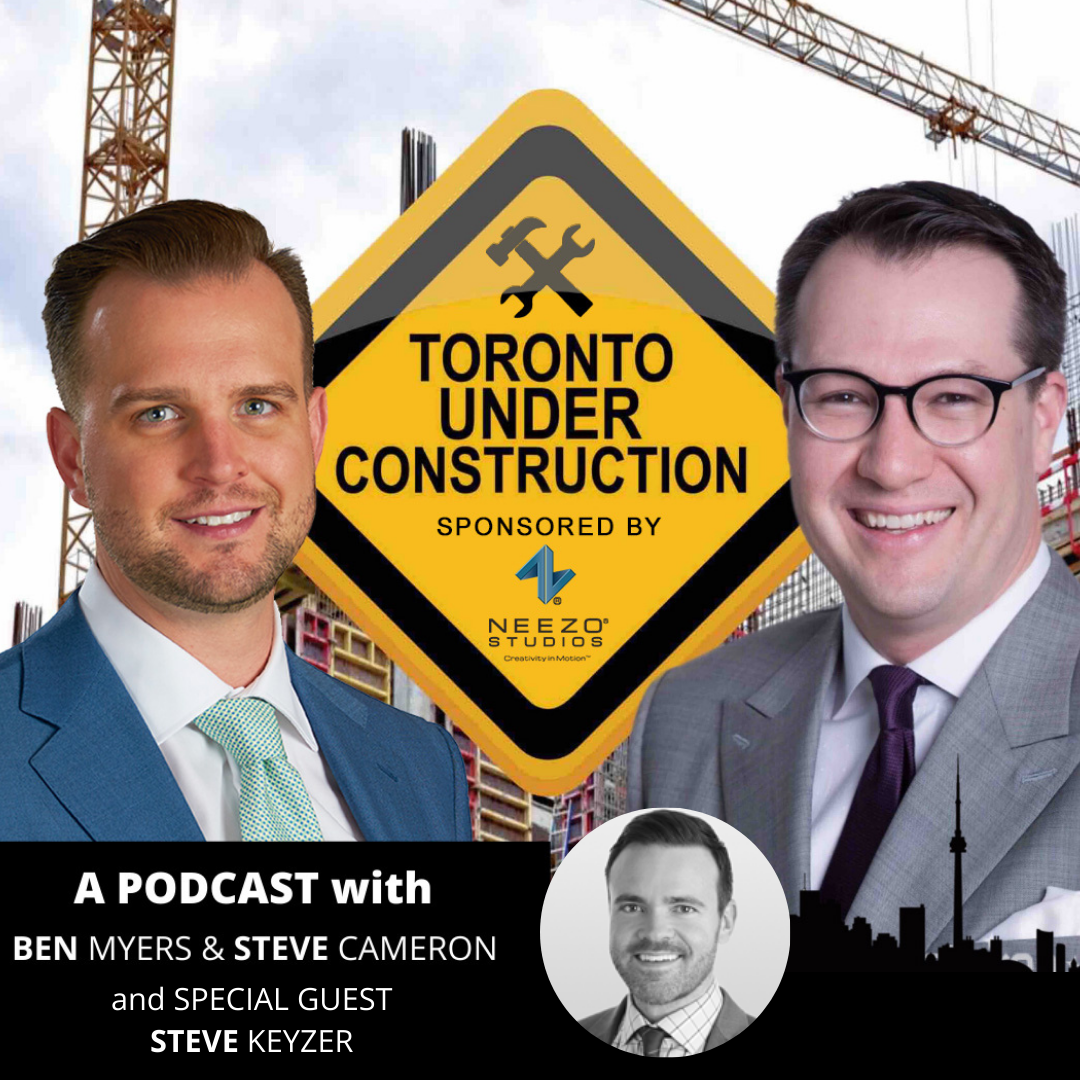 Episode 27 – Toronto Under Construction with Steve Keyzer from Colliers

Episode 27 of The Toronto Under Construction podcast welcomes Steve Keyzer, SVP at Colliers International. The guys kick off this episode reminiscing about a few of their favourite bars in Guelph. After a few laughs, Steve Keyzer shares how he got into the Real Estate industry, starting from graduating from the University of Guelph with a degree in Marketing. Right out of school, he worked at a marketing agency and had a lot of fun contributing to several clients’ marketing strategies, his favourite being Bud Light.

Although marketing was fun, he ultimately decided to hit up Monster.ca and applied to work for several developers. He decided to take a position at Colliers in a broker role as he believed that Colliers had great programs in place to support young talent (including Colliers University). He says he jumped right into it at Colliers, and he’s been there for 13 years.

Getting Started at Colliers

Steve continues his story of how he got his start at Colliers, by sharing that he focused primarily on office leasing. He briefly discusses his strategy for cold-calling marketing agencies as he felt that his previous work experience could give him a leg up in this business. From there, he says he ‘caught the redevelopment bug’ while working on a project with Brad Lamb. Ten years ago, Steve started a program where he worked specifically with land owners to align their expertise with that of developers, considering aspects like density and land value. As land has become more difficult to acquire, Steve has found that many of his current clients aren’t in the real estate development industry. Steve’s team educates these individuals or families and prepares them to be approached by or matched with developers. Steve works to find balance in the numbers and values he provides to his clients, however, with so many realtors, brokers etc. out there, everyone has their own opinion or basis for what is correct. The guys discuss VTBs and Steve provides his thoughts on them.

Steve takes a minute to discuss Colliers’ collaborative work environment, and he says he partners with any person on the sales floor. His direct team has 15 – 20 deals that they are actively negotiating or underwriting on and ‘a whole bunch more that we’re pitching on’. Steve keeps his focus on deals that are exciting and deals that are going to transact, these deals tend to have locations in similar areas in the GTA.

Steve dives into sharing more about how his team chooses clients and deals, mentioning that his team is looking at locations with potential for high density developments. This strategy has brought them to Scarborough, The Portlands and Downsview; Mississauga City Centre is another opportunity location. He provides quick insight into the number and value-play involved in developing in Scarborough.

Steve’s current portfolio has some power of sale projects and others in receivership and the guys’ prompt him to explain why. Steve shares his belief that there are more people or developers ‘getting in over their heads’ or lack some planning expertise – referencing specifically a developer having a misstep on Yonge Street. There is more risk associated with super high rise and with low rise, for the second time in the episode, Steve mentions the sweet spot of 30 – 40 storeys. Steve prides himself on the value he adds to his clients in knowing the players in the industry, and who will/can close on the deal.

A hot topic on the podcast is inclusionary zoning and the guys waste no time getting into the discussion. The City of Toronto is advancing an inclusionary zoning policy that would require new residential developments to include affordable housing units, creating mixed-income housing. Toronto is growing and the City wants to make sure new housing is affordable for those who call Toronto home. Inclusionary zoning is one solution among a range of City initiatives to help address Toronto’s housing needs. Zoning guidelines are finally coming to fruition in July 2022. Steve notes that there are people he knows who were playing a bit of the waiting game, but with this new policy being in place, they are more aggressively submitting to the city for approval. Once July 2022 passes, Steve predicts a slowdown in new development applications. Steve predicts that future land prices and revenue will be sticky for the next 12 – 24 months due to the zoning changes.

After a jam-packed episode about real estate, the episode switches gears and Steve explains the natural fit for him to get started in the booze-business. As a self-described ‘party guy’, University of Guelph varsity athlete, lover of dollar beer night and keg beer drinker for so many years, he came to the realization that the beer just wasn’t good on his digestive system anymore. He switched to vodka soda and then gin and soda, then one day his friend introduced him to gin and sonic – specifically Hendricks gin and sonic (½ tonic, ½ soda). He successfully applied for a trademark for Gin and Sonic in Canada and the UK and launched in the LCBO mid-2020. Unfortunately due to the pandemic, the business didn’t take off in the way that Steve had hoped, however, he discussed the possibility of a relaunch in Ontario, or other provinces in Canada, in the US or even in the UK. Keep an eye out for it!

As the episode ends, the guys play their famous rapid-fire question and answer period and Steve gears up to give his best, quickest, fewest word responses. He answers questions like, “will banning foreign buyers make any difference in what the average buyer pays for a home in Toronto?”, “are you opposed to large corporations buying up single family homes?”, “is Scarborough the next Etobicoke?”, “are you worried about inflation?” and “is Montreal cooler than Toronto?”. If you’re looking to get in touch with Steve, he says you can google him: Colliers, Steve Keyzer or email him at Steve.Keyzer@colliers.com. In a non-pandemic year, Steve and his team host about 100+ people at their office for TURA (Toronto Urban Redevelopment Advisory) Talks for an education session with vendors and industry experts.