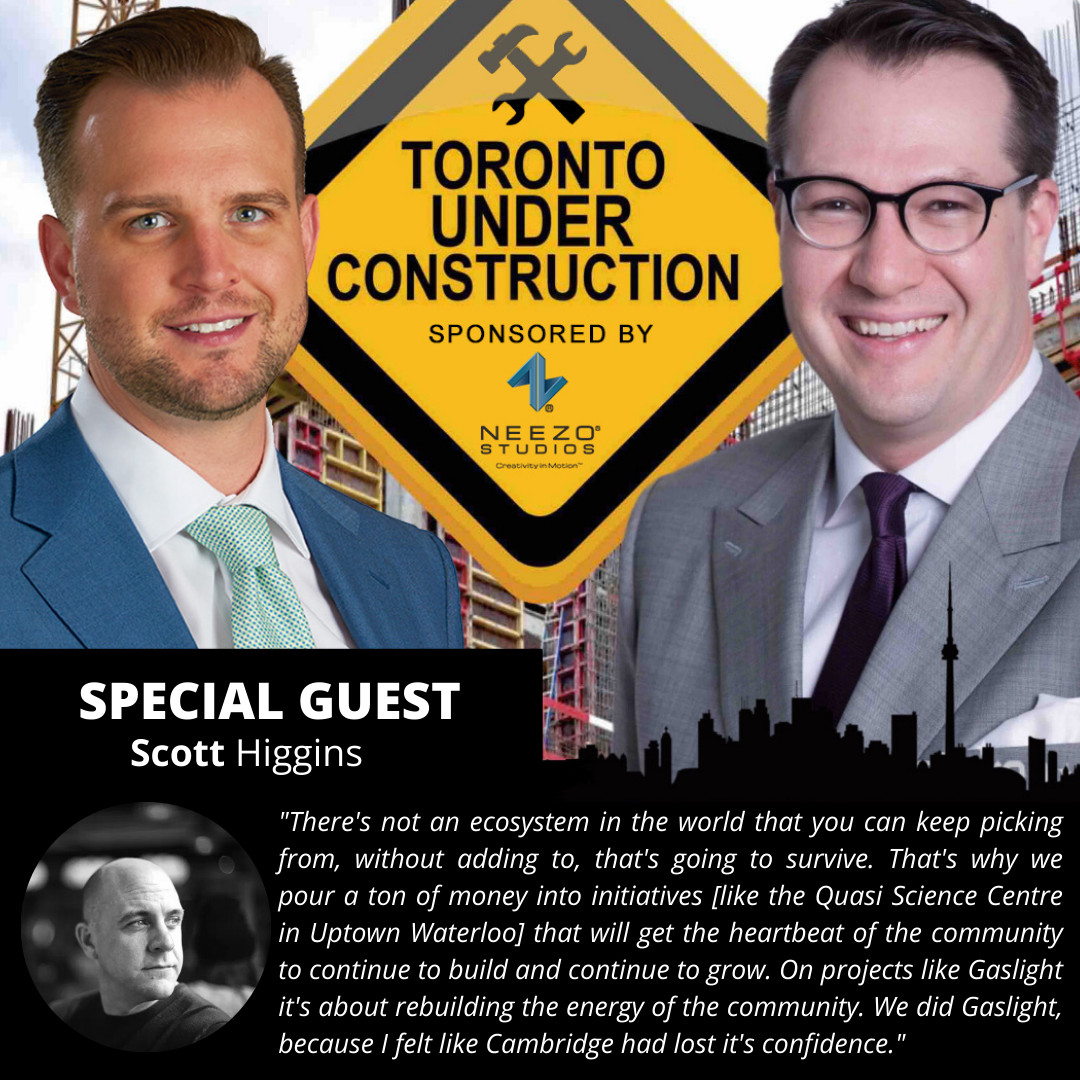 On this episode of Toronto Under Construction, the Ben and Steve travel out of Toronto to Cambridge, Ontario and sit down with Scott Higgins, the President of HIP Developments. Scott has a unique outlook on the way he develops cities and it comes from his love of energy and fun! He says, “Cities are important. Cities are where everything happens; it’s where innovation happens, where creativity happens, where fun happens, everything”.

The guys dive right in, starting with Scott’s finance background and his transition into real estate. Scott attended McMaster University and in his third year, he decided to start a Finance Club with some of his classmates. As part of a club event, Scott invited the Senior Vice President of TD Bank to speak and by the end of the evening Scott was offered a job in Commercial Banking at TD Bank, despite only being in his third year of University. Unable to take the job, Scott took an internship with the Bank and worked straight through his fourth year, only being required to pass his final exams, which he did.

While at TD Bank, Scott worked on a portfolio of nursing homes and countless other deals. He says he “wasn’t in the weeds,” but that “he could see the weeds,” and that he learned a lot.

Starting From A Napkin Sketch

The guys prompt Scott to reminisce about his first deal, a marriage, as Scott calls it. He remembers sketching out an idea on a napkin and later that would evolve to his first project in Guelph in partnership with the largest general contractor in Southern Ontario, Melloul Blamey. They came together on a project called Serene in Guelph, with 160 units. It was priced high, and they found that, right off the bat, the project didn’t have the traction they needed. Scott and team pivoted and restriped the project as student condos, the first of its kind in Guelph. It was called Solstice and was located on Gordon Street; the project was wildly successful.

It was actually on this project that Steve and Scott initially crossed paths. Steve goes on to tell the story about cold calling Bernie Melloul and being passed on to Scott. Scott continues the story, admitting that he really didn’t want to take the call, but did anyway. After Steve jumped through a few hoops for Scott, they made it official and worked together on the Solstice project in Guelph. The relationship is still going strong and to date, they’ve worked on 10+ projects together, including Belmont Village, Circa1877 and Gaslight District.

Scott goes on to tell the guys his next steps in developing purpose built rentals in Cambridge. He reached out to an organization from Halifax, Killiam Apartment REIT, that had been very successful at the purpose built rentals market. He convinced them to partner on a site with him and then engage HIP to manage the development and construction. Within a week, the CEO of Killiam was in Cambridge to discuss the project with Scott. The deal went through and the build was very successful.

The rental market appetite in Kitchener-Waterloo-Cambridge is great and HIP Developments’ high-end condo-like buildings with large units have been a home run over and over. Scott tells the guys that his most recent build, Circa, finished in June 2020, leased 110 units within the first month and was fully occupied in six to eight months, all amid the pandemic.

Giving Back To The Community

“I want to make enough money to have a good life, for my kids to have a good life and for my employees to have a good life. Then I want to invest in the city,” Scott says. He acknowledges the profound impact a builder can have on a town or city – legacy projects, he calls it. Which is exactly what he wants; he wants to have more of an impact than just building buildings. To that, he’s built that reputation in the Kitchener-Waterloo-Cambridge area very well, so much so that the Mayor consistently champions HIP Developments projects from the get-go.

Scott refers to cities as ecosystems; ecosystems that has a number of needs. He references the live, work, play approach. He acknowledges that politicians have had great success in the “live and work” aspects, but that HIP Developments have been picking up the slack in the play area.

HIP Developments have acquired world-renowned art installations, built a community science centre and has developed meaningful programming around STEM (science, technology, engineering, math) and STEAM (science, technology, engineering, arts, math). Scott goes into detail about HIP’s STEM and STEAM programming and how he envisions it replicating minor league hockey, where the whole community and whole family is engaged and involved. He notes that when the city’s ecosystem is thriving, HIP Developments can be a benefactor to that success.

The guys discuss the community ‘block party’ that HIP Developments threw prior to the pandemic with Serena Ryder and The Bare Naked Ladies as entertainment. Scott notes that it was a “$700k party with no rain date” and the goal was simply to shake things up, have fun and help bring back the confidence of the city.

As the podcast winds down, the guys discuss one of HIP Developments latest fully electric projects. There are a lot of developers that are using catchy marketing to sell projects as green-forward or energy-conscious, but Scott says his latest building really embodies the sustainability piece. He goes on to say that 100% of the parking stalls feature EV Parking/Charging, the built-in electric technology allows residents to track energy use and promotes sustainable living. The team is also working to gamify sustainable practices and reward residents for being energy conscious and efficient.

The only way to end the podcast is with Ben and Steve’s famous rapid-fire question and answer segment. They put Scott on the spot and ask him questions like: “where would you like to build next, London or Hamilton?”, “what is a better investment in our future, student rentals or retirement homes?”, “what would he rather, leave a legacy or make a lot of money?”, “favourite sport, hockey or golf?”, “what is your least favourite thing about Toronto developers?’ and more!

Scott has also written a book called The Joy Experiments – which we touched on during this episode.

Tune in to this jam packed episode of Toronto Under Construction, now streaming on iTunes and Spotify!

Listen to the episode on Apple Podcasts now!