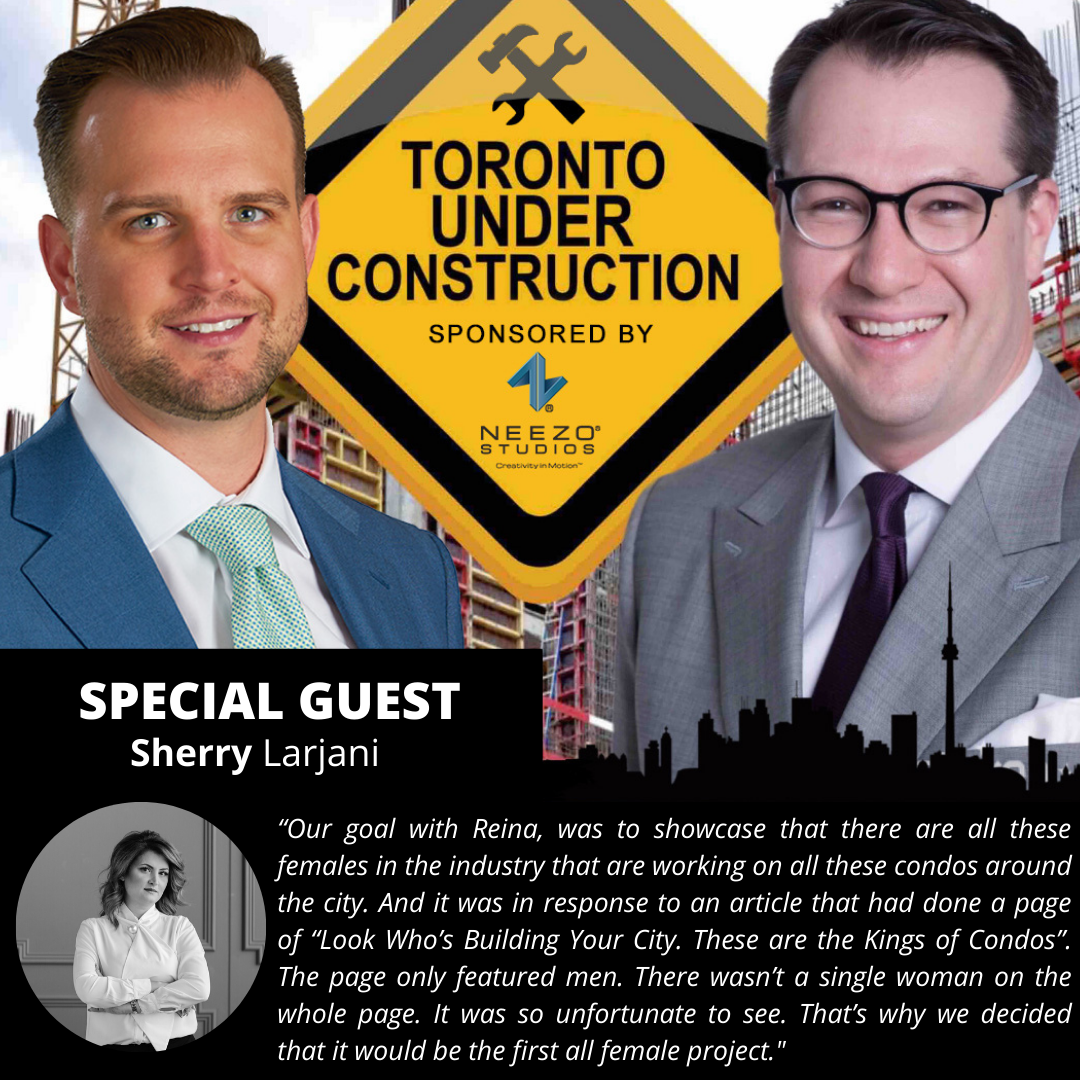 In honour of International Women’s Day we were proud to welcome Sherry Larjani to the TUC podcast last week for Episode 19.

Sherry is an experienced real estate developer and entrepreneur, focused on creating beautifully designed spaces that bring her visions to life.

A consummate professional, Sherry has made a name for herself in a male-dominated industry as President of her own real estate development firm, Spotlight Development Inc. The boutique firm specializes in the acquisition of properties for redevelopment into high density residential and mixed-use projects in Toronto and surrounding areas. For Sherry, it is most important that all Spotlight Development projects have a focus on affordable and healthy living, providing support for the communities in which they are situated.

Sherry began her career by working as a designer at a luxury architecture firm in Toronto. She soon developed a passion for transforming underdeveloped land into livable spaces and found herself most comfortable standing on construction sites amidst all the action. By building relationships with top developers in the city, Sherry has laid the groundwork for future partnerships and collaborations. Current projects include a mixed-use building with Liberty Development and various residential redevelopment projects in Toronto, Richmond Hill, Vaughan, Newmarket and Ajax.

In addition to spearheading her own company, Sherry joined forces with other female entrepreneurs to create Toronto’s first all-female real estate development team and bring Reina Condos to life. Their goal is to create a truly inclusive industry open to all individuals with a passion for real estate and development.

Sherry joins us to share the details of her first site and how she secured the land with persistence and perseverance, two qualities she says women should have if they want to get into this industry. Sherry also shares with us the challenges she is facing with the city to get design and density approvals, as well as dealing with a now zoned heritage building on the site. While discussing these issues, Sherry points out the best way to make our city more affordable is to allow developers to build  denser projects. “It’s unfortunate, especially now that we’re talking about the demand for housing – affordable or not. If you make it possible for developers to make higher density builds, and build more units, they become affordable automatically, no matter what, because we don’t have to stick to a certain price per square foot, that makes the project so expensive. The more restrictions they put on us, the more difficult it becomes to financially make sense of a project. It restricts us for how much we can offer the project for.”

In a city like Toronto, affordability has become a major issue and one that we discuss in almost every episode. Between the price of land, limited supply, the rising costs of construction, NIMBYs, development charges and government red tape and delays, it’s becoming more difficult for developers to bring different price points to market.

“Housing affordability has a root,” says Sherry, “and we need to look at where that’s coming from. The city needs to work with developers on more opportunities.”

The 3 discuss how government and permit delays make projects more expensive, and those costs get passed on to the buyer. “It’s not conducive to the affordability of our city if projects get stuck in 4 years of planning.”

As the episode continues Sherry shares some stories and details about partnering with developers like Liberty Developments and Urban Capital. The guys ask her about Reina Condos, the first ever all female development project.

Partnering with Taya Cook from Urban Capital, Sherry and Taya took the former House of Lancaster site and flipped the script! The two women hired only females to work on the design and development of the site. “We got the idea from a Toronto Life Article titled, ‘The Kings Building Your City’ and they only listed the men. It’s unfortunate to see because the women in this industry are being neglected. The project got so much attention it proved our point that not enough attention has been given to females in the industry.”

Reina is now selling (since October 2020) and you can visit the sales office by appointment only.

Steve asks Sherry if she had one piece of advice for young women interested in getting into the industry, what would it be? and Sherry responds “GO FOR IT! DON’T LET ANYTHING STOP YOU!”

Ben shifts the conversation to talk about the market and asks Sherry her thoughts on whether Torontonians have finally had enough with condos and will be moving further away to get larger homes. “We are still seeing huge demand in pre-construction projects and specifically our projects.” Sherry cites interest rates as one of the driving factors saying “if things change with the interest rates, I’d be worried.”

Steve’s next question is about land and he asks Sherry about the key to pulling off a land assembly? “Every vendor is different, you have to approach each one in its own way. It’s an art form.”

Sherry doesn’t hold anything back in this episode of Toronto Under Construction – you don’t want to miss it! Tune in now iTunes or Spotify.