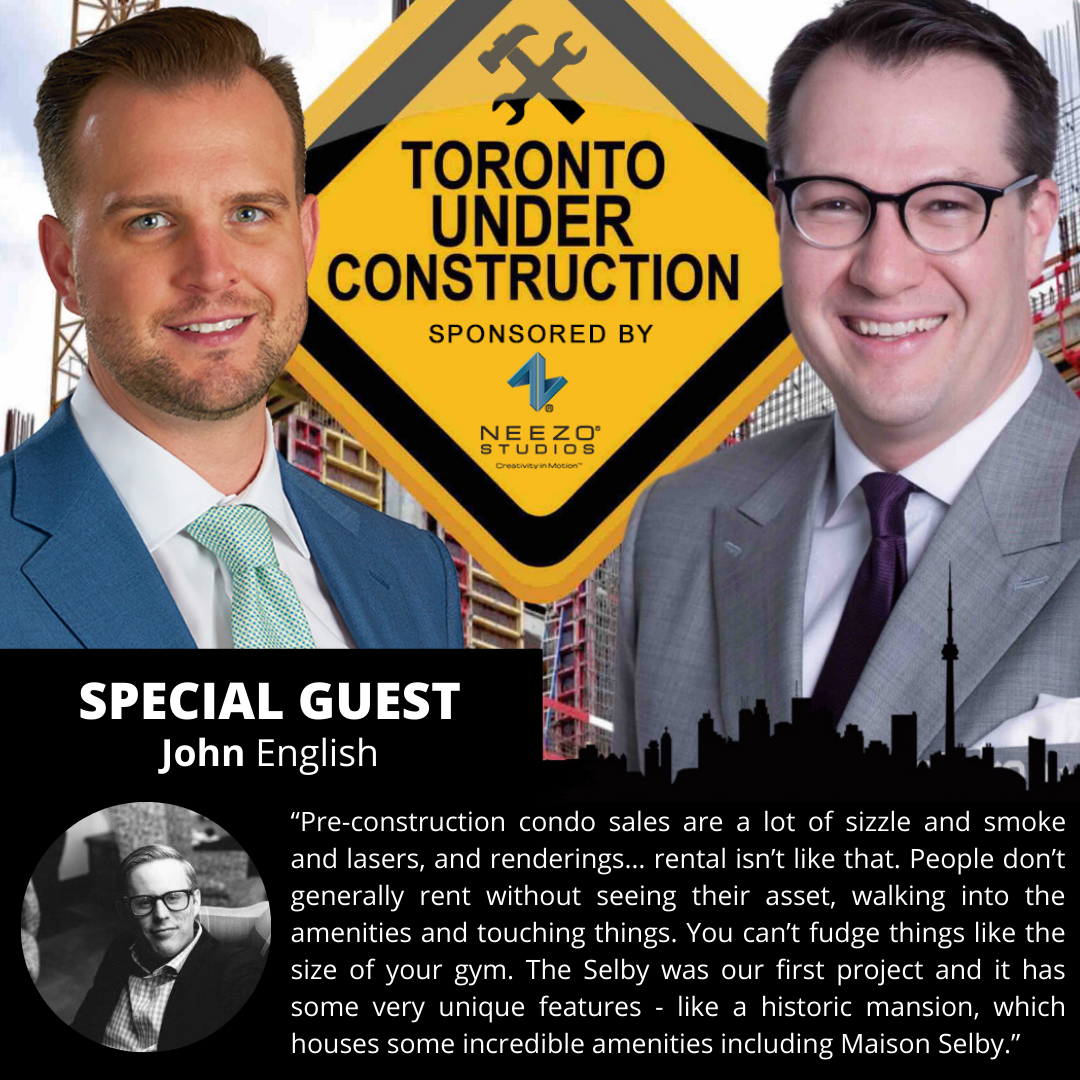 On our last #TUCpodcast episode for 2020, we are excited to discuss purpose built rentals — something we haven’t had a chance to dive much into yet–with Tricon Residential’s John English.

We begin this episode discussing John’s history and how he got started in the industry. John received his Bachelor of Engineering degree from McGill University and a Master of Business Administration from Columbia Business School. John shares that he chose Civil Engineering because he really wanted to work on bridges. As we continue to discuss John’s past we learn that he is a LEED-accredited Professional and has worked as a consultant at Halsall Associates as well as the Director of Development at Oxford properties where he managed development projects across Canada for a variety of asset classes.

In his current role, John oversees development of all Tricon’s Canadian multi-family projects. He is responsible for the entire development process and leads cross-functional teams through the project underwriting, municipal approvals, design, budgeting and construction processes. John shares some details about the US Operations of Tricon and explains that the Canadian Operation is focused on building a purpose built class A rental portfolio.

Ben asks John about the proprietary AI programs that Tricon uses in the US – and although it’s not John’s vertical he shares more details about how they use efficiencies and operations to manage 50-500 buildings in a community, as well as AI for virtual leasing; “You can let yourself into a house remotely, so that you can look at a house on your own time”.

In a time where people are trying to limit contact with others, Tricon is using some interesting technology in the US and working to figure out how it can be applied in Toronto; “This will be our secret sauce moving forward.”

The guys jump in to talking about The Selby, Tricon’s newest purpose built rental project, and John takes a step back to talk about the full program in its entirety. Tricon currently has 8 projects in various stages of development, 3 under construction (5 by next year), 3700 units approved, all in toronto, all in great locations. Tricon’s goal is to build a class A portfolio of rental properties – and the guys discuss the current pre-construction condo model in Toronto, as comparison.

“The condo model is very different. It’s based on selling units to investors, or end users. You want to sell pre-construction. There is lots of sizzle, smoke and lasers, renderings, and impressive sale centers. Rental isn’t like that, people don’t generally rent without seeing their asset. Renters want to see and touch it, so you can’t fudge it.”

The conversation moves on to discuss the thesis and mindset behind purpose built rental – especially in this economic time. PBR projects take 7-9 years; to entitle land, and then zone, get it ready, build, lease it. You are taking a bet on revenues far into the future, so a lot can happen in those years. Long term John firmly believes in the program, especially in Toronto, where there is the immigration story and the employment story. “Toronto is going to come out of this”, says John. “Affordability is an issue – so I believe the rental market is going to come back.”

Steve predicts that after Q3 next year, after a vaccine,  everyone is going to feel a little more comfortable, and as places begin to open up, things are going to come roaring back.

The discussion turns to underwriting, and John states, “rents might be down right now, but we believe that tenants are going to be attracted to a professionally managed building…. So looking forward to future projects, we’ve been relatively conservative with our underwriting and we’re optimistic about rental growth — maybe not in the next 6 or 9 months, but moving forward we’ve got some conservative growth assumptions.”

Ben shares his forecast and he thinks “we’ll get back to September 2019 rent levels – which was the peak of the market, by the end of 2022.”

The guys explore the difference between rental vs condo and talk about offerings and comparisons and the difference between the selling vs leasing process. “Condos are focused on ‘it has to be hardwood floors’, well we do luxury vinyl planks, it’s better quality than poor quality hardwood. But for a condo guy, they’ll say ‘well we just need to say hardwood’….I don’t have to sell it as 9 foot ceilings, you’re going to come in and see that there are 9 foot ceiling,” says John.

Toronto as a whole is not affordable. We have a supply and demand issue; obviously we are under supplied, so what is the solution to this crisis? The guys explore affordability and Steve states “no one wants development, but everyone wants things to be cheaper.”

John notes there is no silver bullet, and that we need a bunch of things like:

“At the end of the day, we need policies that are set in stone, we need certainty,” says John. It’s very challenging with the government we have in Ontario, we keep having to start from scratch every time there is a new government. John cites ‘the rent control fiasco’ as an example. “Every time we get momentum,  then overnight it’s a new policy.”

“If the conservatives lose the next election, you could have three different rent regimes in the lifecycle of one project, how can we plan around that?” asks John, “we just need certainty, tell me what the rules are and stick to it.”

The guys start to wind down the episode by discussing different markets, starting with the US market, and moving to discuss the greater golden horseshoes and London (Ontario) market.

As we wrap the episode, Steve and Ben end on their famous rapid fire and ask John some tough questions such as do we need a vacant home tax? What car should a developer buy to look successful but not greedy? And who is the smartest guy in Toronto real estate?

All this and more in episode 16 of Toronto Under Construction! Tune in now.

Steve and I thank you for listening, have a great holiday season, and see you in 2021!