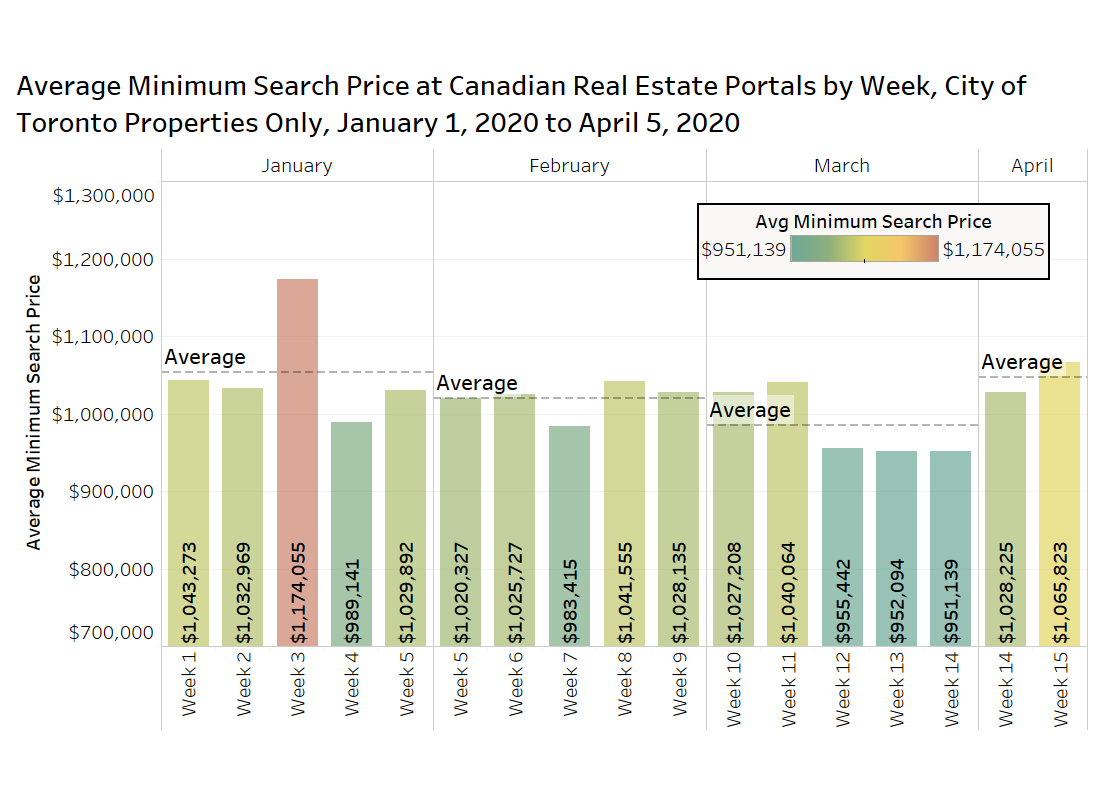 The question I’m getting most often over the last three weeks is: What is going to happen with the housing market? Not much of a surprise given that I am a housing analyst. That said, there isn’t much publicly-available data to go on just yet, but luckily I received some great current online data from Local Logic to look at.

Early numbers from Local Logic can shed some light on how this pandemic is impacting interest in Toronto housing – the commentary below is a follow up to a report published on the national market last week (you can download that report here). Local Logic products are used by approximately 80% of home buyers across Canada. Local Logic’s team of real estate experts, urban planners and data scientists continually analyze market trends on what future homeowners want, what inventory is available, and how those trends are changing over time by geographic area. 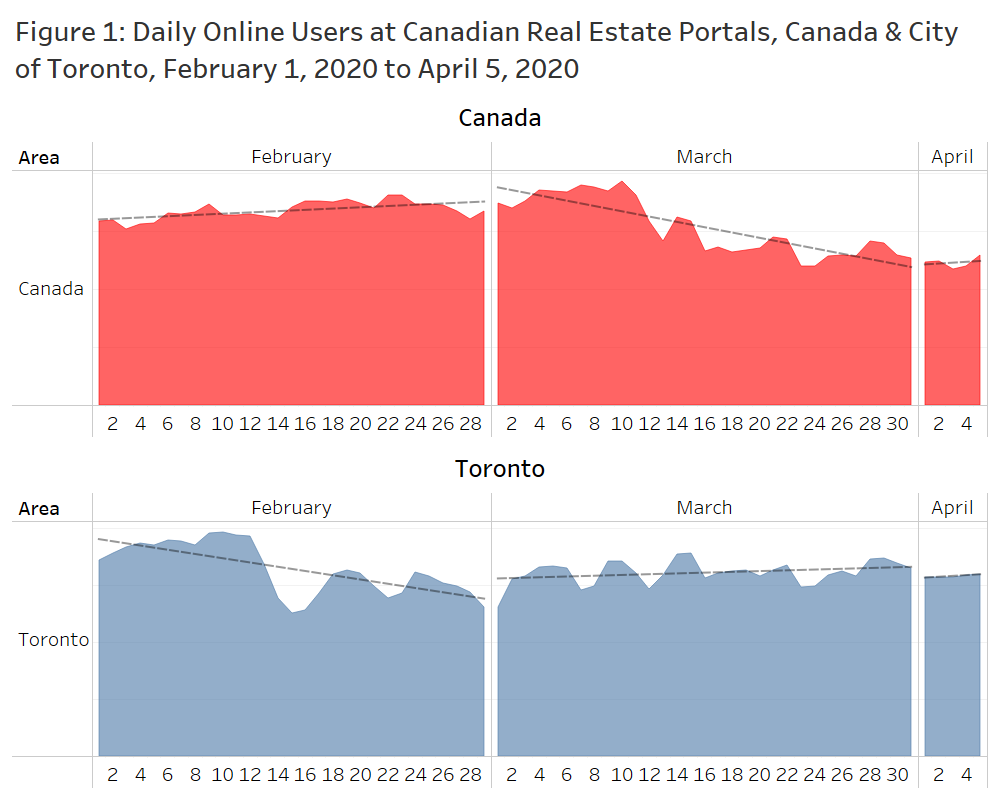 In Canada, the number of daily users peaked on March 10, with activity dropping by over 50% by the first week of April. In contrast, the COVID-19 crisis has had little impact on users in Toronto, with data showing a drop of just 6% in online activity from March 10th to April 5th. The grey dashed linear trendline was actually sloping upward last month.

Part of the explanation for the lack of drop off in Toronto could be that more people are at home, and could presumably have more time to surf the web for properties. Secondly, there could certainly be more “tire-kickers” than prior to the pandemic.

Another way to assess the market is to look at the conversion rate, meaning what percentage of views are resulting in a connection with the listing agent (see Figure 2). 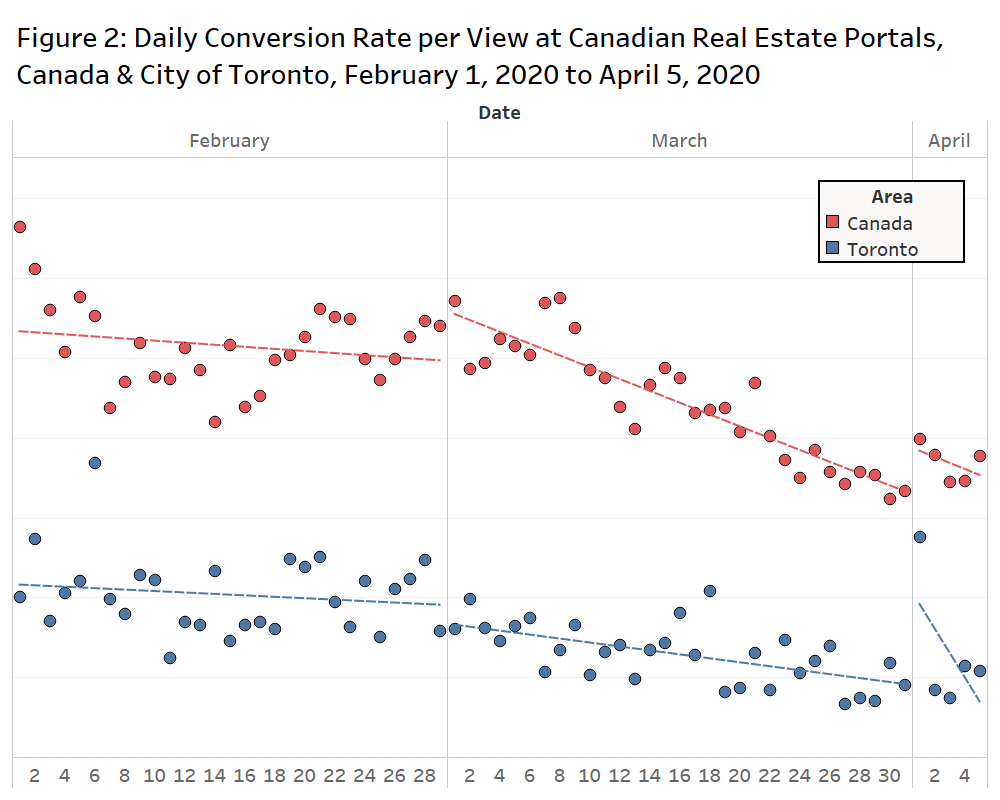 The conversion rate is higher in Canada than Toronto, but from the peak in early March to the first week of April, users contacting the listing agent has declined by about 33% in Canada, while in Toronto, the decline is even higher at about 40%.

A third way of understanding the market is to assess buyer expectations. What are they searching for? Local Logic data in Figure 3 shows the average minimum search price in Toronto from the start of February to April 5th. 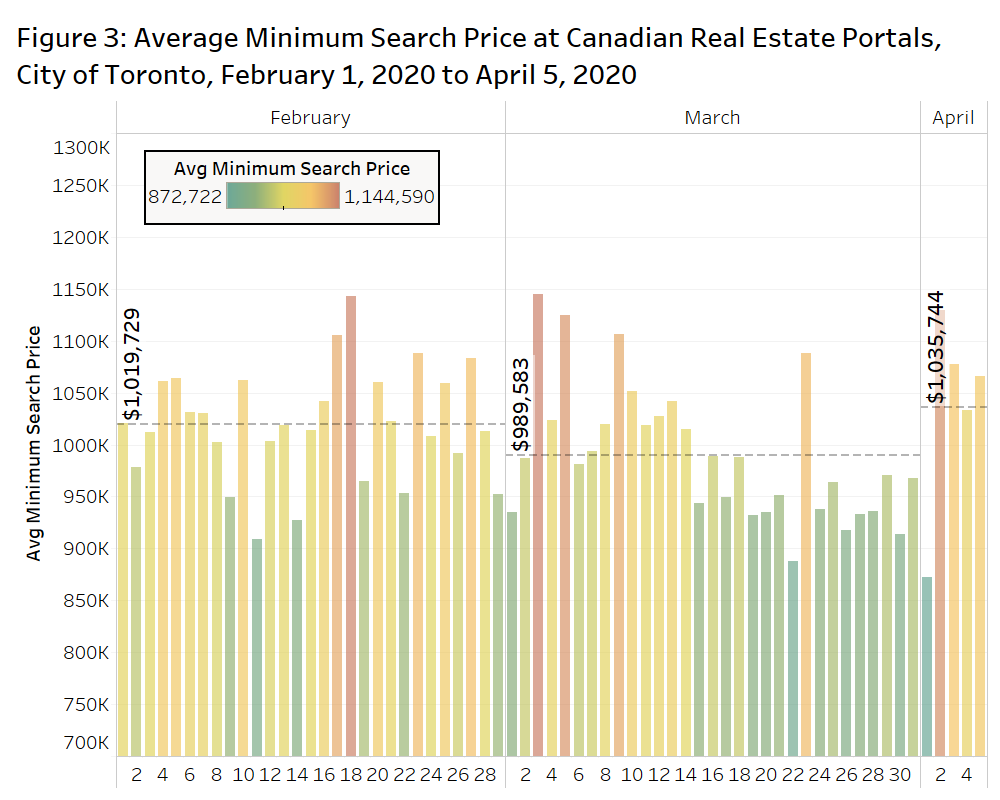 The grey dashed line is the monthly average with February clocking in at $1.02 million, that dropped to just under $990,000 in March, a 3% decline. However, the COVID-impacted final weeks of March show shorter, greener bars (lower priced searches). In fact the average minimum search price in Toronto was $961,000 from March 13th to the 31st, a drop of 5.7% from February.

For comparison purposes, the average resale house price in the GTA in March according to the Toronto Regional Real Estate Board was $902,680 – up 14.5% compared to March 2019. In the CIty of Toronto, the average price was $963,947, almost exactly matching the Local Logic minimum search figure from March 13th to the 31st.

Interestingly, the average minimum search price during the first five days of April was nearly $1.04 million, higher than February! That data anomaly is hard to explain? Perhaps we have affluent folks with more time on their hands than usual? Or is it the fact that less affluent people have suffered the most job loss and are simply not searching for homes?

Some real estate observers expected an increase in listings as desperate owners were forced to sell due to a lack of income, however the mortgage deferral program will help many homeowners with temporary cash-flow problems. In addition, a large number of investor suites that had been used solely for AirBnB purposes were expected to hit the market, but Local Logic data suggests that the daily number of newly listed properties are trending down in Toronto (see Figure 4). 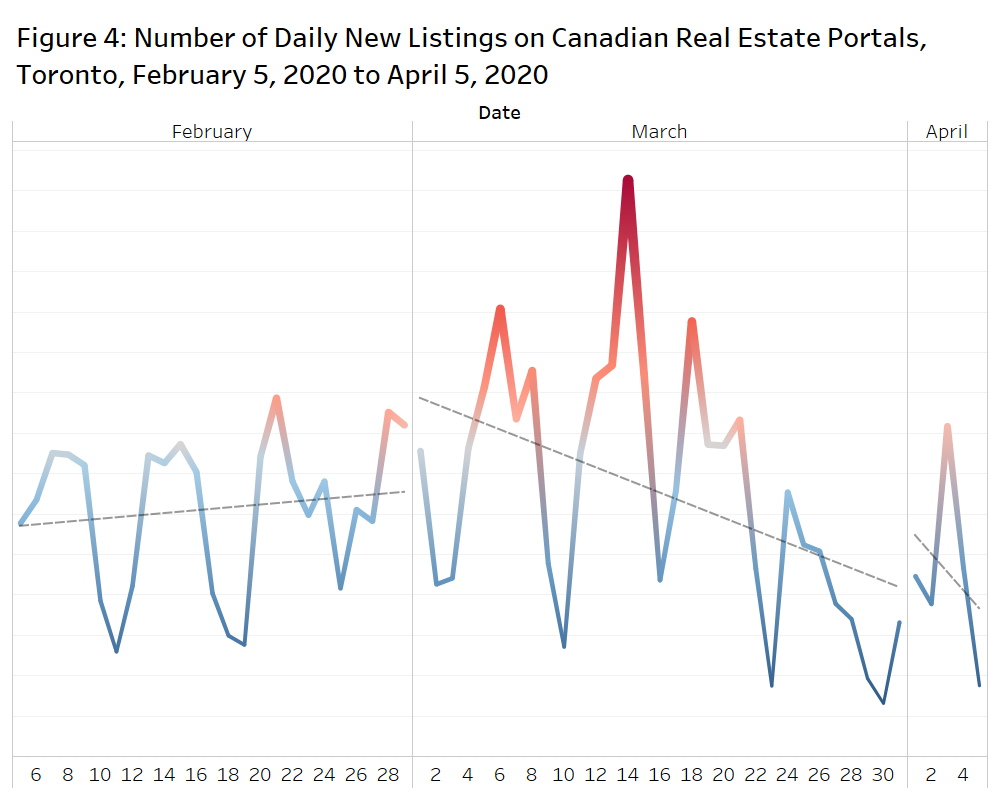 Listings were trending up in February as we got closer to the spring selling season, and continued to rise during the first two weeks of the March. Perhaps the spike in the middle of the month was sellers trying to “beat the virus”, hitting the market before the market turned down.

There was a sharp decline in new daily listings in Toronto, with daily lows at the end of March and the start of April that were below February lows. There was an 80% drop in new listings from peak to trough, but looking at outliers isn’t typically valuable. When comparing the average number of daily new listings in April, to the average in March, listings are down 23%.

The lack of available product should keep the market from dropping significantly, as sellers that don’t need to move are not listing their properties in this time of crisis.

According to data from Rentals.ca, the average price of a condominium and rental apartment in the former City of Toronto was down 1.5% month-over-month in March 2020. As viewings are shut down and former AirBnB units hit the full-time rental market, there is concern about a further softening in rental rates.

The user data from Rentals.ca isn’t as helpful as the Local Logic as Bullpen only has the monthly breakdown, as opposed to the daily breakdown. Figure 5 shows the month-over-month change in pageviews and listings on Rentals.ca for all property types in the City of Toronto (amalgamated City). 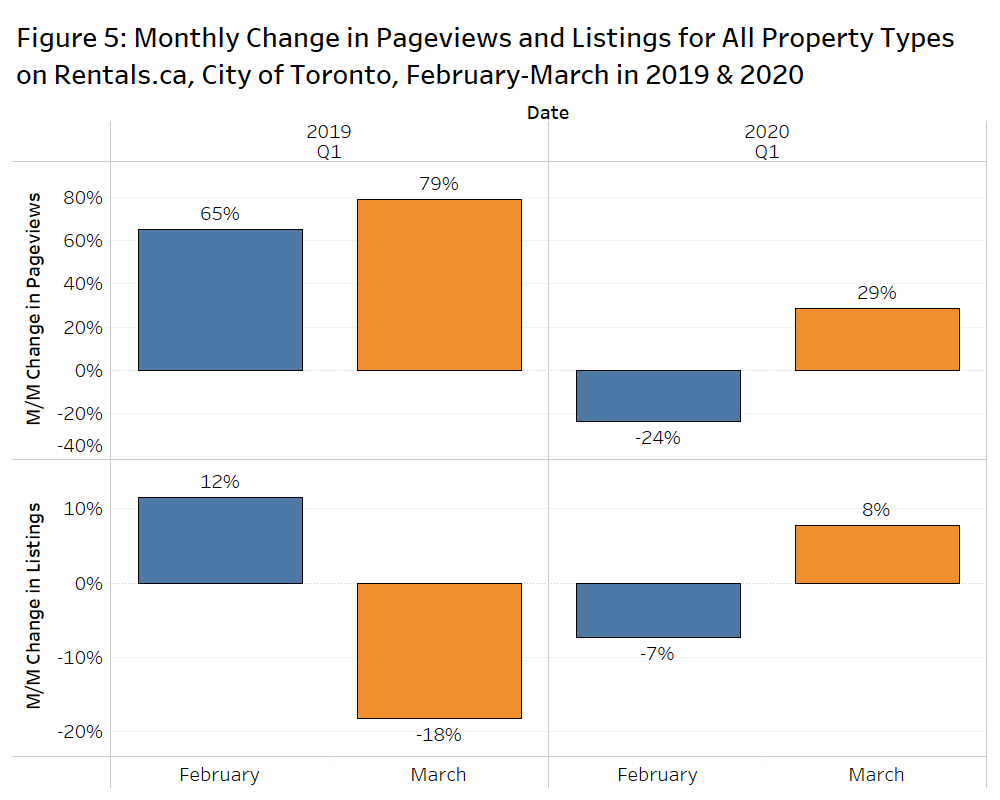 Listings are up 8% in March over February, and pageviews are up 29% monthly. Keep in mind that the rental market is seasonal, and the spring is one of the hottest periods for leasing activity. Last March, pageviews were up 79% monthly, despite the fact that listings declined by 18%.

The rental activity in April will provide much more insight, as the data will reflect the full lockdown that we are currently experiencing.

Will landlords with vacant properties be patient and not lower their asking rents? Will owners of rent-controlled buildings be reluctant to lower rents and lock in a tenant at the “pandemic rate” for several years? Will landlords that are experiencing mispayment with other tenants be more desperate to fill their building to make up for losses elsewhere? What type of incentives will be offered that won’t be captured in the Rentals.ca data?

It is still way too early in the COVID-19 crisis to truly assess how damaging it will be to the Toronto housing market on both the ownership and rental sides. The Toronto market in February 2020 was nearly as hot as it was early 2017, which as we know was clearly too hot, so perhaps this pause is a blessing in disguise, a way to cool an overheated market.

About one million jobs were lost in Canada last month, unemployment spiked to 7.8% and 39% of the jobs eliminated were people aged 15-25 years old. That last point is noteworthy, the pandemic will have the biggest negative impact on the least affluent and youngest citizens, how will that ultimately impact the market? Many of those that lost their job wouldn’t have been in the market anyway, but it clearly isn’t that simple.

Will investors have trouble finding tenants that can pay rent? Will investors ultimately dump a lot of units into the resale market? Even when the lockdown stops, will prospective buyers want to tour through other people’s homes due to fear of the virus? Will there be a big string of evictions post-pandemic? How many new condo projects will be cancelled for lack of sales or uncertainty regarding the ability to start construction, or the likely sharp tightening of lending by banks and other financial institutions? Will people that actually kept their jobs be more conservative post-pandemic, saving their money and continuing the major decline in demand for goods and services?

So many questions and so few answers, we will continue to work with as much data as we can to assess the Toronto market. Stay tuned.

Don’t ignore long-term planning at this time, contact Bullpen for help in setting the ideal unit mix and suite size at your future project.  Reach out today for a market proposal. 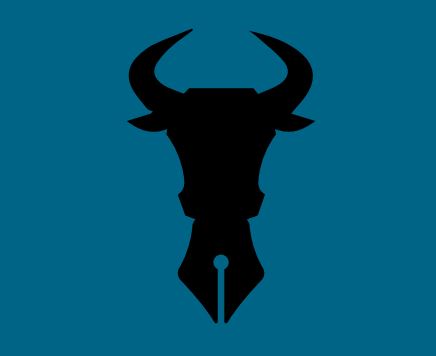