Rent control is a very controversial subject. Is it fair to tenants for their landlord to raise their rent by 20% in a single year? No. Is it fair to a landlord for their tenant to be paying $500 a month below the market rate for a unit? No.

If the Ontario government had set rental control at 5%, or inflation + 3.5%, both issues could be mitigated significantly, but that would be too easy wouldn’t it?

Rent control is not good policy, price controls in any industry typically result in unintended consequences. There is almost unanimous agreement among economists, read my additional summary here: The Case Against Rent Control

The only way to prevent massive increases in rental rates is for tenants to have alternative housing choices. The new mortgage rules and higher interest rates have reduced many tenants’ ownership options, and new purpose-built rental supply growth has been minimal (condos for lease have been the de facto rental supply).

Many developers that were considering building rental apartments converted their projects to condominium after the announcement of expanded rental control in April 2017, and the development industry continually mentioned that rent control is just another disincentive that would prevent them from building purpose-built rental apartments.

There are what I call “high-school housing analysts” that will incorrectly interpret data based on the most simplified thesis, and make claims that the last change to rent control didn’t spur new rental apartment construction. Unfortunately, we don’t live in a one factor world, that change was made in the aftermath of a recession and major housing crash. Lenders were very nervous and developers were in precarious financial positions following the market turndown. Developers had to sell units to get financing, which started the condo boom. Investors knowing their future units would not subject to rent control, increased their purchases tenfold. The elimination of rent control did spur a huge increase in rental supply, just not rental supply in purpose-built rental buildings.

That being said, the purpose-built rental market is very important because of the security of tenure it provides. By 2002, conditions in the Toronto market had improved significantly, rental buildings were being planned again, and 1,825 rental apartments started in 2003, the highest level in nearly a decade. Around 2005, I worked on a study at Clayton Research Associates on behalf of CMHC on the economics of rental apartment construction. I spoke with some of those developers that started buildings in 2003. These developers were not going to move forward with new rental apartment projects because they worried that the influx of rental investors would flood the market with units and depress rental rates, a theory that permeated for the next 10 years.

The next pivotal point was 2015. Between October 2014 and March 2016, there were about 40,000 new condominiums completed, of which it is estimated that 60-70% were purchased by investors. The market was flooded with rental units – rents were flat, but didn’t decrease (on a per-square-foot basis). If the GTA could absorb 40,000 condos in 18 months, rental demand was much stronger than the development industry expected. As new condo prices were increasing at a much lower pace than the 2006 to 2012 period, the interest in rental apartment developments took off. Over 2,000 rental apartments started in 2015, 2016 and 2017.

The pro-rent control folks will then point at 2018: 2,876 rental apartment starts in a rent controlled environment, the highest level of rental starts since 1993 as a sign that rent control didn’t deter rental developers (see chart below). But again, we don’t live in a one-factor world. There are several reasons that many of these projects moved forward this year. Population growth in Ontario is at a 30-year high, the mortgage stress test and higher rates have reduced ownership demand and increased rental demand, many of the sites have been owned for many years and the massive spike in land values has allowed them to use the land as their equity in the deal, and the changing retail landscape has resulted in many REITs reevaluating their portfolio, shifting big box and urban malls to mixed-use communities with rental apartments (also take into consideration their low cost of capital, large land bank, track record with lenders, and long-term hold strategy). Other than Timbercreek, there is no one I know of that is actively buying high density sites to build rental apartments in the GTA.

Lastly, many of the rental apartments under construction will actually be registered as condominium, to allow for the maximum flexibility for the owners. Some of those projects under construction may have been undecided as to whether they would sell or lease the units at completion (and they wouldn’t likely notify CMHC of this uncertainty). 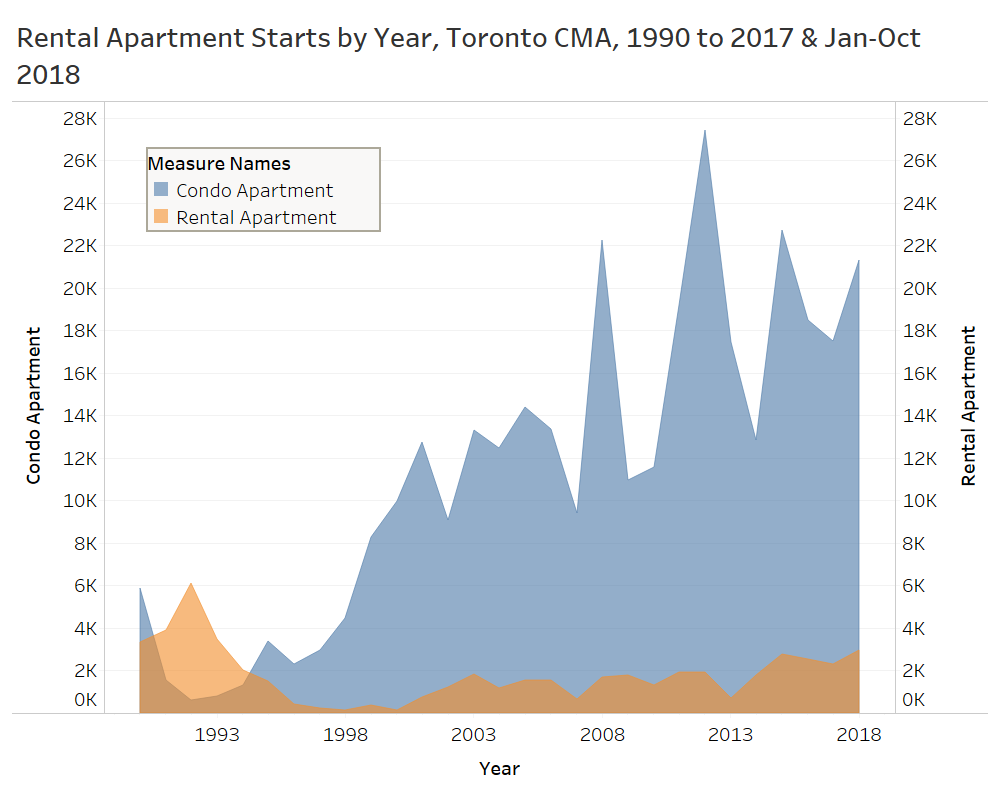 In conclusion, you cannot choke the housing market into cooperating, you can’t exempt one group from the realities of the housing market, while throwing future generations to the wolves. Rent gouging isn’t fair, and there are certainly a lot of bad landlords out there, but let’s not pretend their aren’t bad tenants that don’t pay their rent and damage their units. This change won’t significantly move the needle on new purpose-built rental supply. If I had to put a number on it, I’d say we’ll get 500 to 1,000 more rental apartment starts per year because of the elimination of rent control over the next five years.

The biggest impact as a result of this move will be keeping private investors interested in buying pre-construction condos to lease out. Condo investors have been responsible for over 75% of all new rental supply for the past 20 years in the GTA and without them, rental rates in the GTA would be much, much worse.

It sucks to have to pay the market rent or the market price for housing in the GTA, but really, what market with cheaper housing would you honestly prefer to live in?