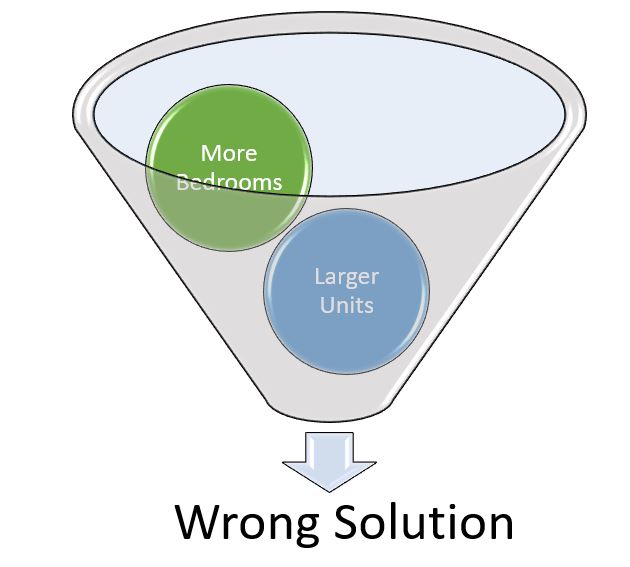 This blog post is a follow up to “Do Developer’s Interests Align with Market Health?” from a couple weeks back. I left off discussing some people’s disgust with the prices/rents and suite sizes of new condominium and rental apartment units built recently in the Greater Toronto Area. There is often criticism of developers’ suite mix by bedroom count, the square footage of the suites, and the asking prices. The blame for Toronto’s housing crisis is placed at the feet of developers and the investors they cater to, because developers could clearly be building larger and much less expensive units! How could a developer have the region’s best interest in mind when they’re trying to stuff everyone into hardwood and granite prison cells?

Columns have been written about the need for the “right” supply in the GTA new housing market, which would apparently solve all of our problems (FYI, it won’t). I believe the industry could deliver a better supply of units, but the best solution is to simply deliver more square footage in total, only when the supply of square footage meets or exceeds demand will prices stop growing or decline. Just changing (ie increasing) the bedroom counts and unit sizes, while delivering the same amount of new square footage will not lower house prices, the opposite would occur: because the units would be larger and thus more expensive, and fewer households would be accommodated, causing those not accommodated to bid up the price of smaller units.

If you work outside the new development industry, you might not be familiar with why developers are building so many small suites. There are several reasons, the first is simple (but requires more explanation) and is this: small units sell well.

After the GTA housing crash in the late 1980s, lenders required developers to sell more units upfront to secure construction financing – usually 70% of the suites – which after the global financial meltdown in 2008, became at least 70% of the total revenue (this is an important distinction, as some developers had 40% of their revenue tied up in their remaining 20% of their units, typically very large penthouse units that would sell after completion). This financing constraint puts pressure on developers to sell a lot of units quickly.

With each successive new building completed downtown, Toronto became more and more desirable, and demand increased for affordable (yet stylish) apartments. Investors took note. Small units required a lower down payment, leased up quickly, achieved the highest rent per-square-foot, were easier to finance, and easier to sell in the resale market. Investors buy early and buy often, and no 300+ unit development would be feasible without these purchasers – so obviously developers want to ensure their units appeal to this sizable buyer group.

There are several other reasons small units have gained in popularity.

In conclusion, there are many factors pushing down unit sizes. Developers would love to make the same profit they do today while selling 2,000 sf units for $200,000, but it isn’t possible. Trying to artificially create the “right” supply will only create unintended consequences, the best solution is to simply push for more supply. Developers want a healthy and welcoming economy, with happy residents, just as much as you do, perhaps even more. Forcing developers to create larger and more expensive units isn’t going to solve our housing crisis or make a significant number of you happier, it will likely make things much worse.